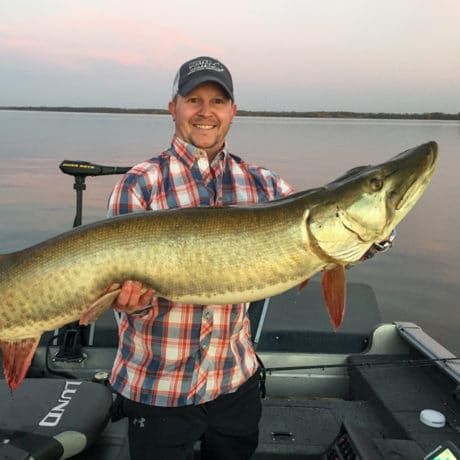 Growing up smack-dab in the lakes area it was really no surprise that Scott’s early addiction was fishing.  A love he no doubt inherited, fishing was something the whole family did together.  Before he was a teenager he found himself sick with “Muskie Fever.”   By the time he was 20 he was taking home hardware in a nationally-televised tournament.  Scott’s fishing passion found him traveling his home state of Minnesota and neighboring Canada in the summer and then in search of open water in places like Kentucky when the ice kept his boat off the lakes at home.

While he still loves fishing something magical happened when he put his hands around the base of the antlers on that first trophy whitetail, he found he had a new addiction.  Today Scott is as crazy about hunting as he is about fishing.  Scott has been fortunate to hunt and fish in many states and provinces, and while he has found Kansas to be a bowhunter’s paradise, and still frequently relives that first trophy elk harvest, but he still gets just as excited about hunting “the pines” back home.

Scott and his wife Kayla, who is an avid huntress herself, share a love for the outdoors.  Scott says, “Hunting, fishing, trapping, looking for sheds, just being out there with family and friends…what more could you ask for?”  Like everyone at Team HHI Scott has a fond appreciation for the outdoors and believes there is a core set of values that is exemplified through outdoor experiences.

Scott is dedicated to personal service and loves having the opportunity to help others find the joy of hunting and fishing that he has been blessed to find.  As a conservationist, he works hard to help maintain habitat and local fisheries as well.  He is also a certified firearms-safety trainer.  Giving back, especially to the youth, is one of those core values most important to Scott.