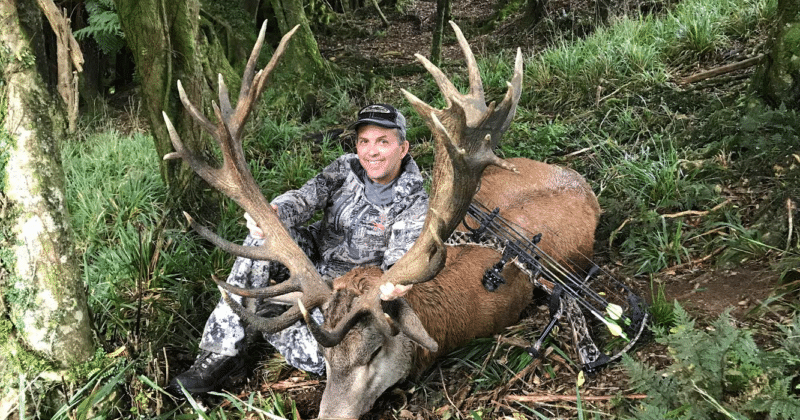 I had my first contact with Buzz Marvin and Hosted Hunts in 2013 – when a friend and I booked a Washington whitetail hunt for the fall of 2014. Early in 2014 I attended an open house event sponsored by Hosted Hunts and had a chance to meet the Hosted Hunts crew in person – and find out what else they had to offer! Their New Zealand outfitter was also there, and I was hooked at the words Red Stag! I quickly booked the stag hunt for 2017 through Buzz and began counting down the days until my hunts!

Unfortunately, I couldn’t do either of these hunts due to health issues and had to cancel both trips. But I never gave up on my dreams, and Buzz never gave up on me! About when I was supposed to be going to NZ in 2017 Buzz contacted me and said there was an opening for 2018 in my time frame! With my health issues somewhat behind me, I jumped at a second chance to get to NZ!

I had never hunted outside the US before, so I had plenty of questions for Buzz and his crew. They were always there to get me the information so I could plan my hunt! If it involved the NZ connection, he was always very good about contacting them to get the answer and relaying it back to me. And being a greenhorn to the world of international hunting – I had plenty of questions to ask Buzz!

In March of 2018 my dream finally came true – bowhunting Red Stag in New Zealand! It was everything I hoped it would be, and I thank Buzz Marvin and Hosted Hunts for helping make that dream possible! My wife was able to make the trip with me, which made it even more special!!

I highly recommend giving Hosted Hunts a call for any of your outdoor dreams – they have the contacts and the expertise to make it happen!