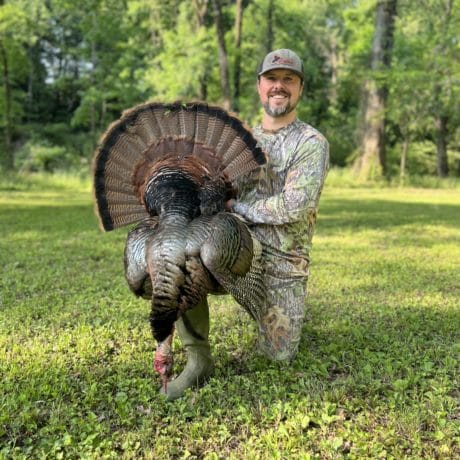 Sage grew up in Barbour County Alabama, where he learned to chase wild turkey and whitetails along the Chatahoochee River and throughout the black belt region. As a second generation archery hunter and birder, he found a love for hunting and wildlife at an early age and his passion has carried him into his adult life and professional career.

Drawn to all things wild, Sage began his professional career as a research technician in Texas and Alabama assisting University funded projects studying songbirds and wild turkeys. Between his stints in wildlife research, Sage also traveled as a turkey hunting guide throughout the southeast guiding hunters in Kentucky, Florida, Alabama and Georgia.

With a successful guiding career underway Sage took the next step and he became an outfitter specializing in turkey and deer hunts in his home area of Alabama. With a growing client base Sage soon found himself helping hunters connect with adventures throughout the country. Sage has traveled and hunted throughout the Southeast and Midwest. In addition to guiding, outfitting and booking hunts, Sage is also a published author and can talk turkey with the best of them!

Sage has settled down in central Alabama with his wife, Brady and his son, Cyrus. He continues to share his love for the outdoors with them and hunts close to home in pursuit of whitetails with archery tackle and loves the challenge of public land turkeys.

Sage is dedicated to helping hunters find their next adventure and is honored to be a part of the team at Hosted Hunts.