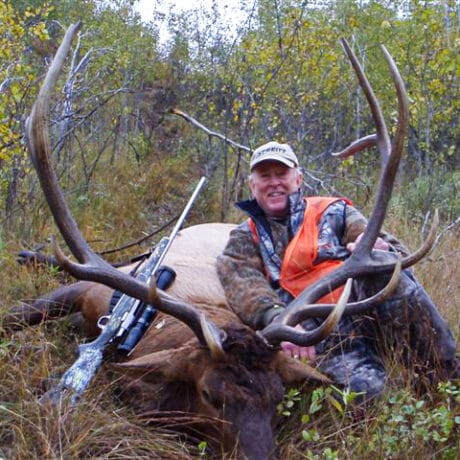 For Buzz, hunting has been a way of life since he was old enough to walk beside his dad. For the first years it was carrying a stick, then a .410 and, at twelve, he was upgraded to a rifle. While duck, goose, and upland birds were his first passion, he graduated to deer in the 1950s and has never looked back.

Buzz has hunted for, and taken, most of North America’s big game trophies, including a memorable trip to the Arctic where he remembers sleeping on ice and enduring high temperatures of -40 F. Today you can see his beautiful polar bear on display at “The Woods” in Warroad, MN. In addition to his trip to the high-Arctic, Buzz has also hunted in more than twenty different states, 11 Canadian provinces/territories, as well as Mexico, Argentina, and New Zealand. While he is not opposed to hunting with his rifle or black powder, his personal favorite is archery. The exhilarating challenge of the up-close encounter is a thrill that still gets to him despite his many years of experience.

Buzz is quick to acknowledge the support and sacrifice of his loving wife, Kaye, as she has been by his side for more than fifty years of marriage. All along she has supported his passion, and while he spends about sixty days every year in the field, admits he’s even missed anniversaries because of it. In the off season, Buzz and Kaye are busy spending time at the lake with the grandchildren, sharing with them the joys of the outdoors. It’s a family heritage sure to be carried on for generations to come.

Buzz is a lifetime member of the NRA and RMEF. He also belongs to SCI and Ducks Unlimited.